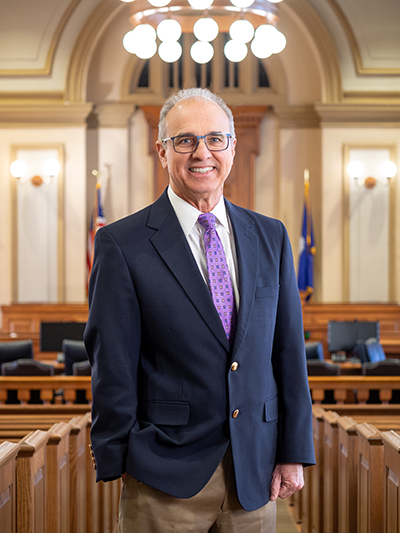 Charles S. Bradford is a South Carolina native, having been born and raised in Greenwood, South Carolina. He is a 1976 graduate of Clemson University with a B.A. in Political Science, and a 1981 graduate of the University of South Carolina Law School. He was admitted to the South Carolina Bar Association in November of 1981, and he has practiced law continuously in York County, South Carolina since his admission to practice. His first job in York County was at Ridley & Ridley, P.A. in Rock Hill, South Carolina from 1981 to 1985. Thereafter, he practiced in York, South Carolina with Spratt, McKeown & McCrae, which became Spratt, McKeown, McCrae & Bradford, and then Spratt, McKeown & Bradford from 1985 until 1996. Mr. Bradford formed his own firm in 1996 at his current location in the center of downtown York at 4 East Liberty Street in York. In 2022, Mr. Bradford sold his law practice to Alexis P. Espinoza who began her career at Charles S. Bradford, P.A. as an intern in 2016, then a law clerk and an associate attorney in 2017 and law partner in 2021 (Bradford Espinoza, P.A.)  He now has “of counsel” status with the firm.

With more than 40 years of experience in many areas of civil practice, Charles Bradford has a depth and breadth of legal experience. His law practice now focuses primarily in the following areas:  commercial real estate, wills, trusts and estate planning, and estate administration.  He will be spending much of his time mentoring the attorneys in the office in these practice areas, as well as the areas of probate court litigation, small business planning and formation of corporations and limited liability companies (LLC’s), real estate related litigation, such as mortgage and mechanic’s lien foreclosures, quiet title actions an partition actions.

We are dedicated to serving our clients by providing legal wisdom, good sense, a friendly exchange, and expediency.

DISCLAIMER: Any information posted on the Bradford Espinoza, P.A. website (www.csblawfirm.com) is intended only to be representative of the firm's practice. These examples are not intended to, and cannot be relied upon, to predict the results in any other case. Information or interaction on this site should not be construed as establishing a client-attorney relationship or as legal advice. For advice about your specific situation, please consult one of our attorneys.
Photo by Image Source Group - www.imagesourcegroup.com